What’s The Difference Between an F1 and F1B Goldendoodle?

We often use affiliate links when referring to recommended products. It does not cost you anything to use these links but it does help us earn a commission on qualifying purchases. Thank you in advance for your support!

In this article, we will discuss the differences between and F1 and F1B Goldendoodle.

Whether you are considering a full-sized Goldendoodle or a Mini Goldendoodle, their breed types will be similar except for the size of the poodle.

What Is an F1 Goldendoodle?

The F1 Goldendoodle is a first-generation cross that is 1/2 Golden Retriever and 1/2 Poodle.

F1 translates as a first time cross between breeds. Being equal parts Poodle and Golden Retriever, you typically expect to have strong genetics and health in your puppy because you are pulling genes from both breeds for the very first time.

F1 Goldendoodles typically don’t shed or if they do shed, shedding is usually light. As a whole, Goldendoodles are compatible with most families with mild allergies.

The F1 Goldendoodle is often associated with a shaggy or wavy fur coat with less defined curls. This is due to the long straight hair of the Golden Retriever which is 50% of your F1 Goldendoodles genetics.

What Is An F1B Goldendoodle?

The “B” in F1B Goldendoodle stands for what is knows as a “back cross”. A Back Cross is where you breed an F1 Goldendoodle and then breed it back to a Poodle. This back cross breeding method results in the F1B Goldendoodle being 3/4 Poodle and 1/4 Golden Retriever when looking at genetics.

As I mentioned above, because the F1B Goldendoodle is 3/4 Poodle, they are typically better for families with moderate to severe allergies.

While no dog is 100% Hypoallergenic, the F1B Goldendoodle would be a good place to start your research and evaluation if you want to add a dog to a family that suffers from allergies.

The Fur Coat of an F1B is associated with a lot more curls. They are often tighter curls that resemble the fur coat of a Poodle.

** If you want to learn more about the fur coat of a Goldendoodle here is a good article.

This would make logical sense because the F1B Doodle is 3/4 Poodle.

What Is An F2 Goldendoodle?

Now I will really challenge your brainpower…

An F2 Goldendoodle is still 1/2 Golden Retriever and 1/2 Poodle because both parents are 50/50 crosses between the two breeds.

Is that what you guessed?

I hope you found this article about the differences between an F1 Goldendoodle and F1B Goldendoodle helpful. You would apply the same percentage of genetics to an F1 or F1B Mini Goldendoodle. The only difference would be the percentage associated with the standard poodle would be switched for the miniature poodle.

I'm a life long lover of dogs. Since I was 2 years old I've had retrievers, mixes, and currently, a Mini Goldendoodle named Lexie. I converted my wife into a dog lover and my two daughters are as well. Our doodle Lexie was the inspiration for this website because after we got her everyone wanted to know more. There is a ton of information on the web, but I feel most of it was not from the perspective of a Goldendoodle owner.

Dogs In Heat: How Often Do Dogs Go In Heat?

What Is The Difference Between F1 and F2 Goldendoodles?

At What Age Is a Miniature Goldendoodle Fully...

Are Goldendoodles Protective Of Their Owners?

Why Do Goldendoodles Growl?

Can Goldendoodles Be Easily Trained?

How Do Goldendoodles Show Affection?

Can You Breed A Goldendoodle With A Retriever?

7 Reasons Your Goldendoodle Barks at You

Do Goldendoodles Need Their Glands Expressed?

GOT QUESTIONS? USE THE SEARCH FEATURE 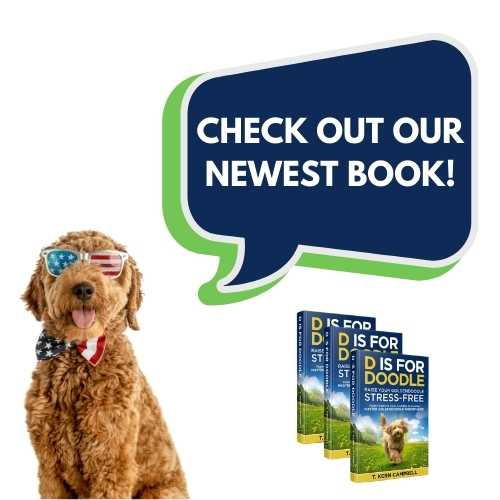 Get The Goldendoodle Newsletter!

GoldendoodleAdvice.com participates in affiliate programs when possible. Assume all links are affiliate links. As an Amazon Associate, I earn from qualifying purchases.