Dogs can sometimes seem crazy when they start to run around the house without provocation. They may even act goofy or downright weird. If your Goldendoodle is acting crazy, then you likely want to know why. Here’s what I’ve found out.

Why is My Goldendoodle So Crazy?

Goldendoodles may act crazy because they’re bored or understimulated. They’re either trying to get your attention or entertain themselves.

There are a few ways you can help your Goldendoodle act a little less crazy. Read on to find out some tips on keeping them calm.

How Do You Tell If Your Goldendoodle is Bored?

One reason why your Goldendoodle is acting crazy is that they’re bored. Goldendoodles are a mixture of both Golden Retrievers and Poodles. Both breeds are considered smart because they’re working dogs or sport dogs.

These types of breeds had to learn how to fetch and retrieve during hunting season. They were primarily used to retrieve waterfowl.

Due to their intelligence, it’s easy for them to become bored. The same can be said of a breed comprised of the two. Goldendoodles are often intelligent. They require mental stimulation to be happy. If they don’t receive it, then they’ll seek it out themselves.

One way that you can tell if your dog is bored is if they chew on things they shouldn’t. Coming home to ruined furniture, toys, shoes, and other valuables is never pleasant. Yet it’s a sign that your Goldendoodle needs something to occupy them.

Chewing is fun. It keeps their minds active and gives them a chance to clean their teeth. It’s also one of the easiest ways to entertain themselves. You can help alleviate boredom–and save your furniture–by providing toys for your Goldendoodle to chew. That might be anything from a bone to an actual chew toy.

When they’re given the right kind of toys, Goldendoodles can happily occupy themselves for some time with them.

Another sign that your Goldendoodle is bored is if they just lay around and do nothing. You may even hear a few huffs or puffs from them. These are dogs with nothing to do. Because Goldendoodles have a lot of energy, you need to give them opportunities to release their energy and stave off their boredom.

A great way to keep them active and entertained is to take them for a walk. Even a few minutes outside can make a real difference for them. Regular walks can also make them excited. They’ll be able to understand a routine and know that their walk is going to occur soon.

Finding your dog digging in the yard can cause you quite a headache. It can also indicate that they’re bored. Just like chewing, your dog will start to dig holes in an attempt to entertain themselves. Giving them regular exercise can help keep them calm and from destroying your yard.

Finally, your dog may seem bored if they’re licking themselves constantly. Grooming is a normal part of a dog’s life. It’s also how they express affection. However, if your dog continues to lick themselves without a break, then it might mean they’re bored. It’s just another way for them to entertain themselves.

How to Know if Your Goldendoodle Wants Your Attention

Another reason your Goldendoodle may be acting crazy is if they want your attention. Dogs tend to exhibit certain behaviors because they know they will get a response. This is why training can be difficult. If you only give your dog attention now and then, it can reinforce bad behavior.

An example is barking. If your Goldendoodle wants your attention, then they might bark excessively. You respond to them, usually telling them to stop, and it gives them what they want. A negative behavioral trait is born.

Any time the Goldendoodle wants your attention in the future, all they have to do is bark a lot. This may make them appear crazy, but it’s really just a cry for attention.

You should also take them outside regularly to ensure they’re not barking because they need to use the bathroom. Once all other reasons have been eliminated, if your dog starts to bark excessively, then you can ignore them. This will help them understand that barking for your attention isn’t acceptable.

Another way your dog may beg for your attention is by laying on you. They might lay their head or their entire body on you. They want to be close to you, but they also want your attention. This can sometimes make your Goldendoodle appear quite silly or crazy.

They may appear desperate to be near you. Giving your dog plenty of attention can make them appear less crazy in this manner, too.

Your Goldendoodle May Still Be a Puppy

Age plays a factor in how crazy your Goldendoodle may be. Most young dogs have a lot of energy. Goldendoodles have even more energy. Both the Golden Retriever and Poodle have a lot of energy because of their use in sports. They need to have enough energy to hunt waterfowl down, swim to it, and then take it back to their owners.

Because of their high levels of energy, your Goldendoodle will also have a lot of energy. They’re most active and energetic while they’re a puppy. This stage of their life can last up to 18 months. By then, they’ll still likely have a good deal of energy, but they may be a bit more manageable.

There are a few things you can do to help release some of their energy to keep them from acting crazy.

One of the first tips is to be mindful of rewarding energetic behavior. One common trait dogs possess is expressing excitement when you return home. Your natural instinct may be to coo at the dog or be as excited as they are. This rewards their zany behavior. That can lead to other problematic behaviors like pining, wetting the floor, and barking.

A better option is to ignore them. You don’t want to reward the exuberant behavior. Eventually, they’ll calm themselves and learn to modify their behavior. When the overexcitement transitions into happy greetings, you can start greeting your dog in return.

Another great method to keep your puppy in control is to tire them out. The best way to do this is by exercising them. Because Goldendoodles are smart, there’s no end to what fun activities you can do with them. You may want to try teaching them new games like fetch and nose games.

Goldendoodles will likely naturally pick up how to play fetch. Their instincts have been honed to retrieve objects for centuries.

Even something like a short walk can be enough to tire them out. Puppies need shorter walks than adult dogs, surprisingly. They may seem like they have more energy, but it really only comes in bursts. They’re just as likely to run around the house at top speed as they are to drop down and take a nap.

You can play games with them indoors. Some Goldendoodles will love playing Tug-of-War or chasing a soft ball through the hallways. By playing with your Goldendoodle, you can give them the attention they need and tire them out. They’ll be less likely to exhibit crazy behavior as a result.

When Will My Goldendoodle Calm Down?

As long as you haven’t reinforced bad behavior, most of the craziness should disappear as your Goldendoodle matures. For many owners, that age is around 2-4 years old. This is when they’ve left their puppy stage and are starting to enter their later teenaged years. They may still have bursts of energy, but you’ll likely find that your Goldendoodle is far more manageable at this age.

If your Goldendoodle is still acting crazy beyond four years of age, then it may mean you have a very active dog on your hands. As long as you tire them out and keep them mentally stimulated, everyone should be happy.

It might also mean that you reinforced bad behaviors. Training your dog or going through professional obedience training can help undo those behaviors.

One problem that owners may face is crazy behavior around strangers and other pets. Their dog may be perfectly calm in the home. The second a stranger visits or they encounter another animal, however, the dog goes crazy. This is a sign that the Goldendoodle wasn’t socialized.

Socialized means that the dog was allowed to visit other people and dogs. They became used to meeting new people to the point that it no longer phases them. It should be noted that even socialized dogs may be a little excited when new people show up or a new dog crosses their path. The key difference is that a socialized dog will lose interest. A dog that isn’t socialized will continue to bark, pull at the leash, or even act aggressively.

To keep your dog calm, you need to socialize them early. Allow them to go to the park and hang around other dogs. Invite your friends and family over to the house. Even older dogs can be socialized if you continue to take them to the park.

Socializing your dog can keep them from acting crazy.

Goldendoodles may seem crazy, but they just have a lot of energy and zeal for life. You can calm them down by regularly exercising them, giving them lots of attention, and providing mentally-stimulating toys and chews. 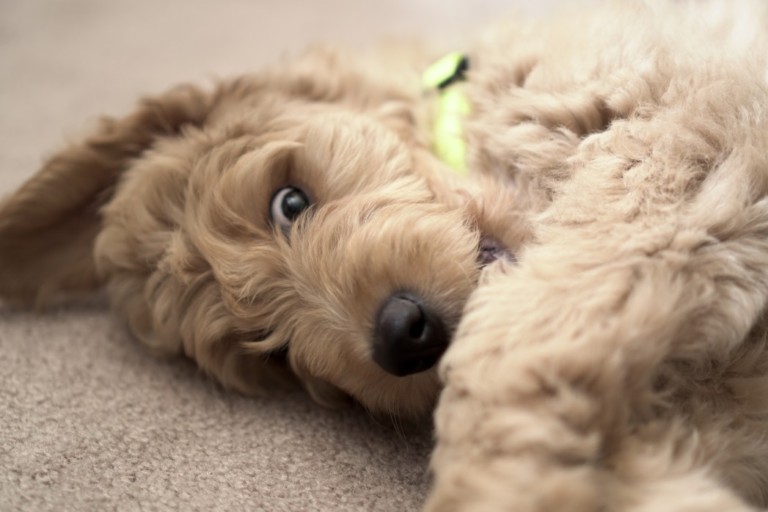 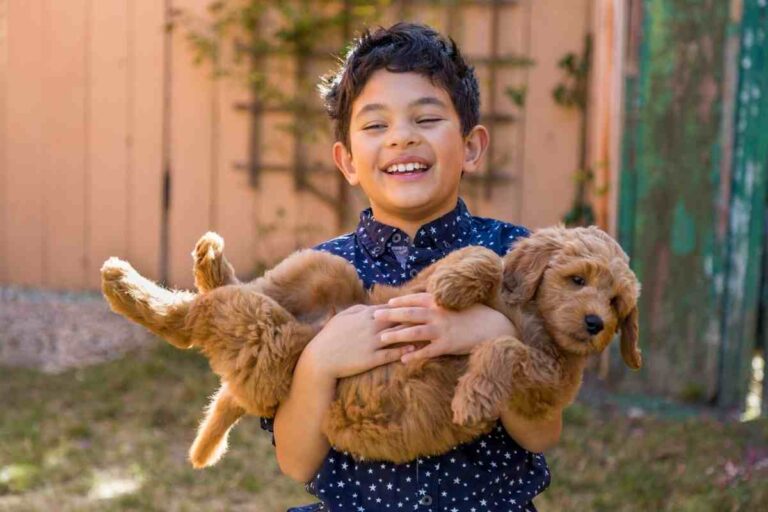 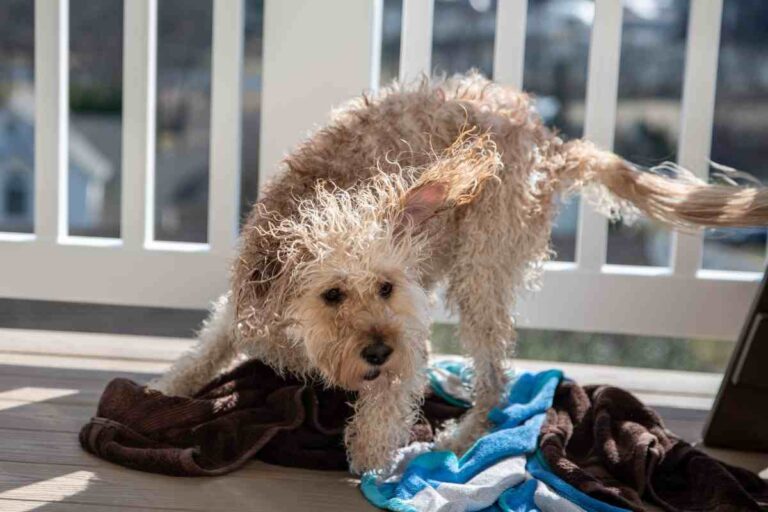 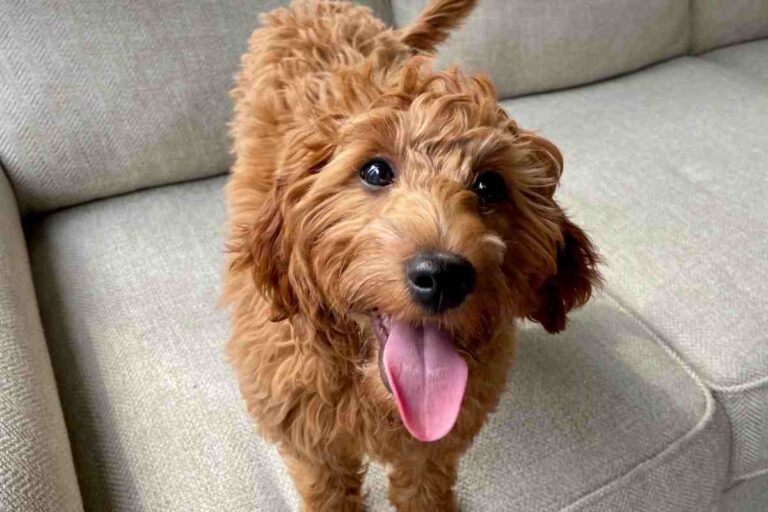 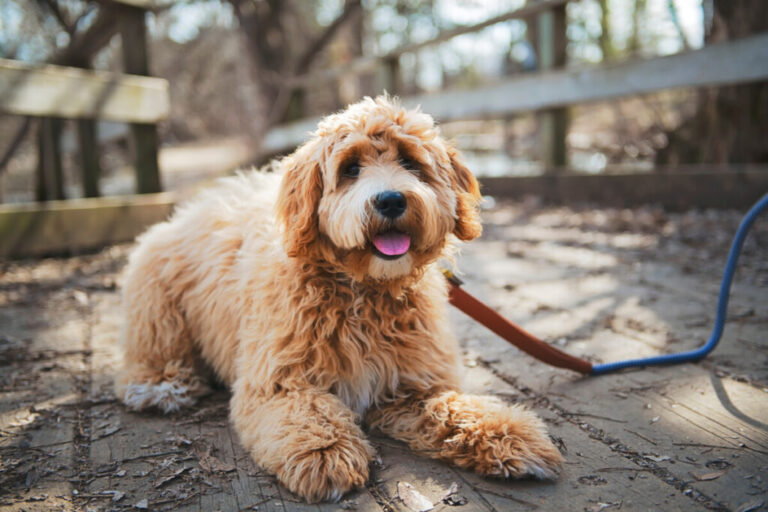 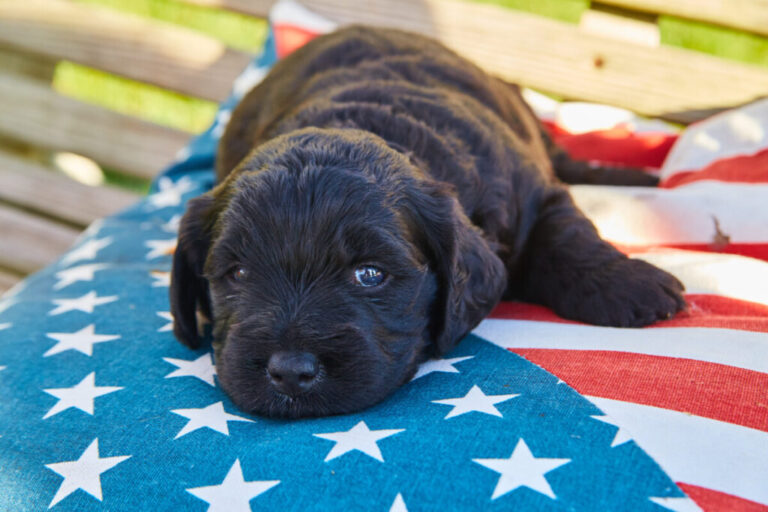